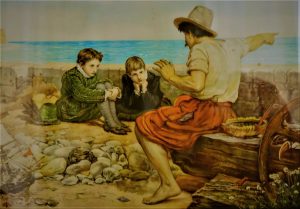 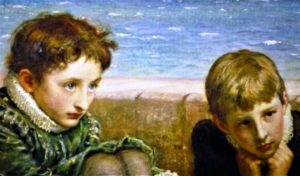 A famous painting will be staged on Budleigh beach when the town’s museum opens its doors in a few weeks’ time for the Raleigh 400 exhibition.

Victorian artist Sir John Everett Millais painted his masterpiece in 1870, showing the young Walter Raleigh, the future favourite courtier of Queen Elizabeth I, and his half-brother Humphrey Gilbert listening to a sailor’s tales of exotic voyages. As previously reported in the Journal, the painting, part of Tate Britain’s collection, will be on display for three months at Fairlynch Museum from 28 May.

Adding to celebrations on the opening day of the exhibition, members of the town’s Art Club have set themselves the challenge of recreating the scene painted by Millais. And a few additional characters will be making an appearance in the tableau, including the artist with his easel, an adult Sir Walter himself on horseback and his mother Katherine Champernowne, all in period costume.

Local families have been keen to respond to the challenge by providing models for the two children in the original painting. Eleven-year-old twins Frank and Henry Southan from St Peter’s had their heads shaved last year to raise funds for cancer charity Macmillan Cancer Support.  Now the boys are ready to help the museum project by taking part in the tableau and encouraging visitors to see the original painting at Fairlynch.

Playing the part of young Walter Raleigh, as he listens to the stories which supposedly inspired him to found the first English-speaking colony in the New World, will demand real acting skills, thinks Henry. ‘Lots of people will be taking photos of the scene, so it’s important for us all to have the right expressions,’ he points out.

Gender will not be a limiting factor in the tableau. ‘Purists might object but I can’t see any reason why the children shouldn’t be girls, or a boy and a girl,’ said organizer and Art Club member John Washington, who will play the part of Millais.

The original painting will go back to Tate Britain at the end of August, but Fairlynch volunteers and Art Club members organizing the tableau are sure that images of this new Raleigh-inspired masterpiece will be treasured by the museum and by many proud parents.

A certain number of places are available for young persons aged 10-14 to play the parts of Walter Raleigh and Humphrey Gilbert in the Raleigh Wall tableau, from 2.00 to 4.00 pm on Monday 28 May. For further details and to book a place please email Fairlynch Museum Trustee Michael Downes via mr.downes@gmail.com