£3000 raised for school library from Panto!!

£3000 – yes THREE THOUSAND pounds – was raised from the ‘Treasure Island’ production! This is a staggering amount.

I’d like to say a huge thanks to Steve Andrews, and everyone involved giving time and skill towards our new library project. We feel so lucky to be getting so many pieces of eight!

This project showed Budleigh at its  best. The talent and hard work of the cast and backstage colleagues were unsurpassed . Beyond that, it was the commitment and enthusiasm from everyone connected with “Treasure Island” that enabled us to play to virtually full houses for all three performances.

The school staff  found time in their busy lives to support and encourage us throughout. The  ticket outlets – The Card Shop Too and the Tourist Information Centre – could not have been more helpful.

Special thanks, also, to Paul Strange and the “Journal” whose co-operation in running a “Treasure Island” competition boosted sales significantly.

A final – and special – mention must be made of the pirates themselves. These were eight girls as young as seven and all of them performed magnificently.  Well done Evelyn, Megan, Phoebe and Marliyah.

Steve Andrews commented: “We don’t live on an island. But our town is certainly  a treasure.” 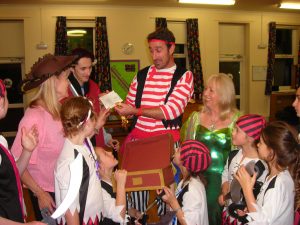