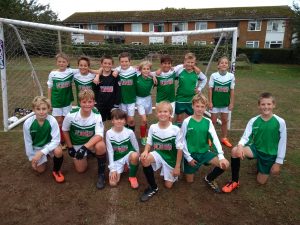 Report by Otto, Will and Ted

St Peter’s were well on top the whole game, and ended up winning 7-0!

The first goal came from a good corner by Jack. Ted got to the ball first and poked the ball in off his shin.

The next goal came after good work by Shay. His pass found Mawgan, who beat two defenders and finished nicely into the corner of the goal.

Max in goal and the rest of the defence, where doing well to stop The Raleigh Federation from scoring. There were a few close calls, including a clearance off the line by Otto.

Shay then had another assist for Jack. He made a good pass which was smashed into the net with an amazing right-footed hammer!

With less than 10 mins to go in the first half St Peter’s are hoping for a fourth.

The skipper, Otto, came out from the back with the ball. He had an ambitious shot from the halfway line which hit the post, but Elijah was there to tap it in for St Peter’s fourth. A scrapy goal: but a goal is a goal.

In the second half, St Peter’s scored another 3. The first came from a cross by Mawgan, to Will, who tapped it in.

The next was also by Will, who scored a lovely header from a Jack cross.

With 3 minutes to go, Elijah tackled the ball off the opposition. He played a nifty one-two with Ollie Crook, advanced on the goal, and smashed the ball down into the bottom corner.

A first win for the year 6 St Peter’s team. Well done everyone for a great team performance.